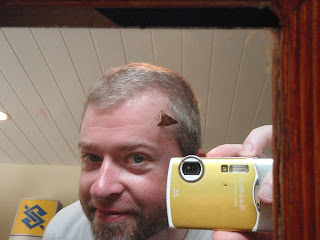 Yesterday was a down day; most of the others were stayed at the campsite an extra day, so those of us who decided to come back early could do whatever we wanted to do. We headed downtown to do some souvenier shopping; in one shop, I made an instant friendship with a little moth who must have liked the taste of my skin or something; I would try to brush it off, and it would just hop onto the brushing hand and sit there looking very pleased with itself. More determined efforts led to the moth flitting up to my face. At that point I decided I had to take a photo of my friend, so here it is.
I also went to the supermarket again, and since Keewi requested it, here are some photos of the supermarket. Not terribly exciting; it's a pretty typical supermarket. Fairly large Asian food section, which is interesting since we've seen no Asian people and no Asian restaurants in Manaus whatsoever; I'm not sure who is buying the miso and the wacky Japanese snacks! 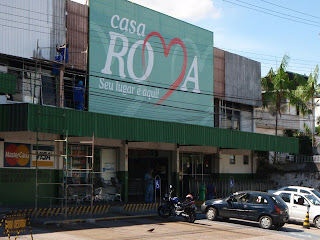 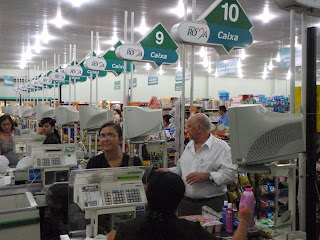 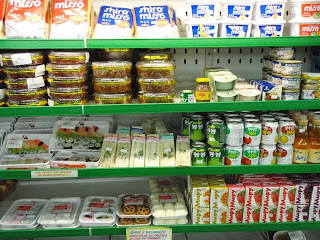 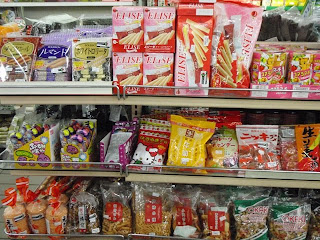 After that we had a bit of an exciting time. Last night there was an enormous storm, the biggest we've seen on this trip. It was presaged by huge howling winds, and the rain followed soon after. I had gotten back to the hotel from dinner before it started; others were not so lucky, and got the most thorough soaking of their lives, I think. Leaks started in my room immediately. I put out an old water bottle to catch the main drip, and laid down a towel to soak up most of the rest, and then lay back to read as the storm raged outside. The lights flickered repeatedly, and brownouts lasting several seconds occurred repeatedly, but the power never quite went out entirely. Eventually I went to sleep as the storm continued. I didn't hear about it until this morning, but apparently some others had it much worse. Mike got the shortest straw; he got three (count 'em, three!) inches of water in his room, and most of his possessions, including his laptop, got soaked. He wasn't in his room when any of this happened; he just came back from a late dinner, and when he opened his door, a wave of water washed out towards him -- he said it was like Jumanji (although I think Jumanji ripped that off from Delicatessen, myself :->). It's not clear whether his laptop will ever work again, or whether any of this is covered by any sort of travel insurance, or what. There was an awful lot of swearing last night, apparently.
Also last night I discovered a small tick on my leg. I've found ticks crawling on me before, but I've never had one attach; the ones in California are big enough that they tickle me as they crawl, but these guys here are tiny, perhaps about a millimeter long, or slightly more. I put some Neosporin on it, on the theory that the suffocation of the vaseline would make it detach and back out. I don't know if that's just a myth, or what, but my tick did not detach by the next morning, and a more thorough search turned up two more as well. I have no idea where I got them; nobody else has them. I had my pants tucked into my socks the entire time we were at the INPA campsite, even when I was sleeping. So it's a mystery. Anyhow, we used alcohol and hydrogen peroxide and hot sterilized tweezers and all sorts of implements of destruction, and got the ticks removed, probably leaving behind all the little jaw parts and tick feces and everything that you're not supposed to leave behind. Supposedly there are no tick-borne diseases in the Amazon, so the risk of infection of the wound is the main thing. We'll see how that develops.
Anyhow, after all that excitement the group went today to the Parque Mindu, a fairly large park in northern Manaus with some nice stuff in it. It makes no pretense of being wild jungle, but it does have lots of orchids, a river with naturally occurring caimans and electric eels, agouti, and so forth. Mike spotted a glassy-winged sharpshooter, which was interesting; it is an invasive pest in California that causes big headaches for the Central Valley farmers, but perhaps here it's native, I don't know. It's the insect that looks like a leafhopper, but it's quite large, maybe almost two centimeters long. The acai palms had their lovely red roots showing nicely. We saw two wild sloths up in the trees, but they were impossible to photograph since it was raining hard; point your lens up at the sky, and it would immediately get raindrops on it. 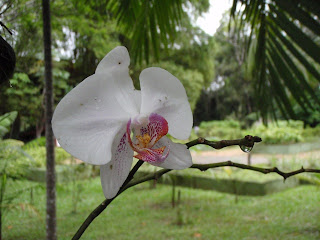 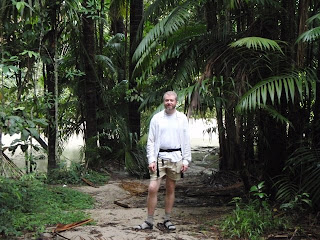 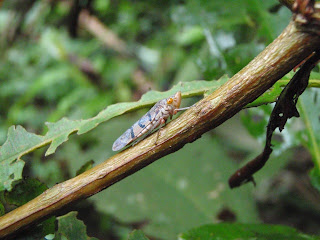 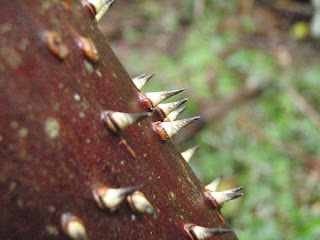 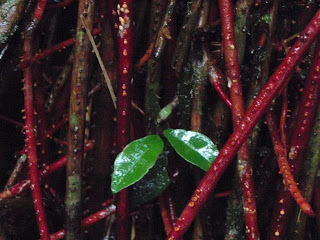 Then we went for a tour of the opera house, called Teatro Amazonas, in the center of downtown Manaus. This is a building that was constructed at the height of the rubber boom, just over a century ago now, and it is ostentatious and overblown; not as much as comparable buildings in Europe, to be sure, but considering that it was built in the middle of the rainforest, it's quite a phenomenon. My favorite part was a ballroom in the upper part of the hall; its parquet floor was quite beautiful. We all put on felt overshoes before entering it, so as to not scuff up the varnish, and it was so smooth that walking felt like skating. 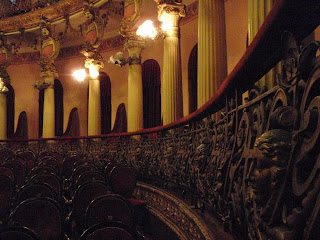 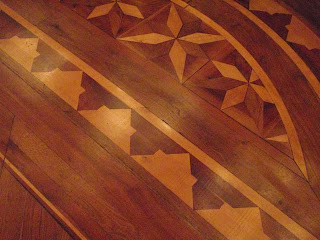 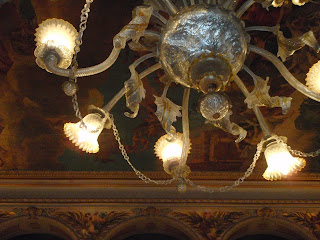 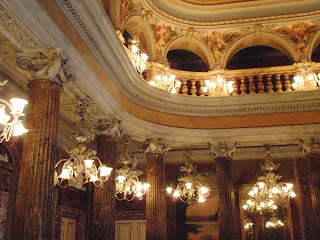 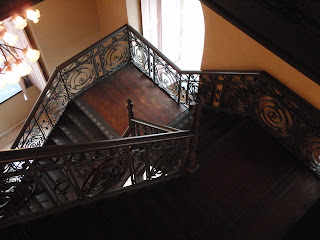 We have a group meeting in a couple of hours, at which a few students will do presentations. You may have noticed I haven't been putting up presentation synopses any more; it got to be an oppressive amount of work, since I couldn't have my laptop present for many of them, so I would have to take hand notes and transcribe them. Dr. Ouverney intends to browbeat everyone into typing up their own presentation summaries and putting them up somewhere; I'll link to that on this blog when it becomes available, probably well after the trip itself has ended.
Posted by Ben Haller at 3:40 PM

So funny! the can juices are Korean! I know Brazil has large population of Japanese so probably they are familiar with Japanese food and snacks like Hawaii.
I thought your moth was arrow for video capture lol