I've been blogging like mad, but haven't had a chance to get to the internet cafe, so the last several days will get posted in one big wave. Sorry about that!
This entry is about what we all did last night: we went to a big festival called Bar do Boi, or Bibim Bap, or something like that. Well, not quite; the full-on festival is a little ways away. What we went to was a rehearsal, really. The festival involves two teams whose mascots are bulls, so you have the red bull and the blue bull teams. Each team has musicians, singers, dancers, and presumably set and costume designers, choreographers, and who knows what else. The teams perform on alternate weekends, and get judged by the people who attend their concerts. In the end, as Dr. Ouverney put it, one of the two teams wins, and whichever one it is, that's cause for another several weeks of celebration. 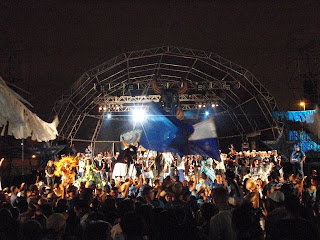 So we went to a place called the Sambodroma (the "place where samba is," perhaps similar to the English words hippodrome and aerodrome and so forth). It was essentially a large dance hall, with the musicians in the front, platforms for the team dancers next, and then a big area for people to dance. We got there soon after 10 PM, when the ball was just beginning to roll, and the place was pretty empty; but after an hour or so the pace picked up, the music got more interesting, and the performance got more complex. 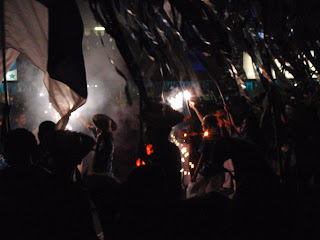 Costumed dancers with various props came out and danced around the arena, and the bull (not a real bull, but a person in a large bull costume) was driven out on a float. Fireworks started being set off, and the arena filled with smoke, and people were screaming and dancing wildly; it had quite a Bacchanalian mood!
Eventually the costumed dancers and the bull went up onto the stage in front, and the band launched into some very bouncy, catchy music. The music had a specific dance that one was supposed to do to it, which I gather had been choreographed by the blue team ahead of time; the team dancers in the front would do that dance, and the Brazilians in the front rows were watching carefully and learning the moves so they would be ready when the real festival arrived. I, not being Brazilian, did not attempt to learn the moves, but I did wiggle my butt a little from time to time. 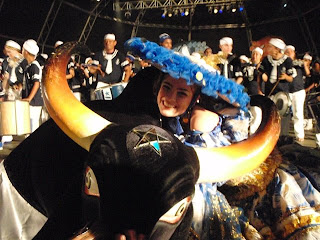 Some of the costumes were quite interesting; the lead dancer was a woman in a sort of frilly blue mock-colonial dress with a very wide-brimmed hat, and there were two very young girls (I would guess perhaps eight years old) who danced right up in front in brilliantly colored costumes, one an orange-feathered indigenous tribal sort of get-up, the other a green dress with appliqued flowers. 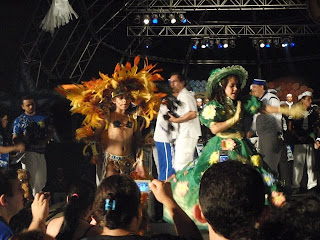 Many of the other people in the blue team were dressed in sailor outfits, for no clear reason.
It was unspeakably loud; Brazilians are a remarkably noisy people. I put earplugs in early on, and even then my ears were ringing for more than an hour after we left at about 12:30 AM. The music was great, but there were long interludes of advertising for Coca-Cola, who apparently put up a lot of money for the blue team, and since I'd gotten up around 6:30 that morning, I eventually ran out of gas. Others in our expedition stayed on for another hour or so; the Brazilians, being Brazilian, apparently kept going until dawn!
Posted by Ben Haller at 5:40 PM

It remained me of japan the hokaido festival little bit. but must be much louder! wiggle your cute butt!!!