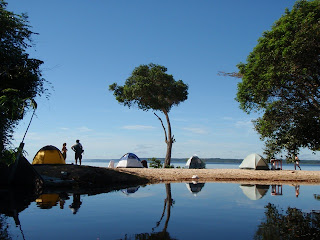 Camping was fun. The INPA campground was more developed than we expected; it had decent bathrooms, and a big shelter that we could hold meetings under, and even had chairs and tables. They had told us that they had foam pads of some kind; we expected some kind of foam camping pads such as one might take backpacking, but they turned out to be two-inch-thick gymnasium-style pads; I slept on one of those, with a mosquito net hung over me. I got bitten up a lot at Juma Lodge, mostly, I think, on the canoe rides around dusk; I should've tucked my pants into my socks. So I'm trying to be more careful now. Everybody has lots of bites, and nobody in the group has gotten a tropical disease yet, so I think the risk is low at present. Mostly we're just all very itchy.
The 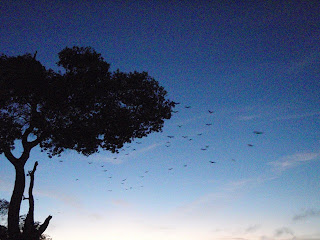 campground was right on a beach that had a little sand above water even now, at the high water mark; I gather it has stunning expanses of white sand at low water. It was pretty scenic, but not nearly as remote as we expected; there was a local village a stone's throw away across a small side river, and we heard music from them until fairly late at night; boats were also putt-putting by all through the evening and the next morning. It was sort of catered camping, as it turned out. Dr. Ouverney had arranged for food to be delivered to us for lunch and dinner, so we had barbecued chicken, rice, fish (your choice of head or tail, I had one of each), and so forth. Simple food, but tasty, and much easier than trying to cook for twenty people. I did only a little birdwatching; kiskadees and tropical kingbirds, but mostly amazing numbers of vultures, traveling in flocks (as in the picture at right, but I don´t know how visible they are) or sitting hunchbacked in trees. We all wondered where there is enough carrion to sustain such a huge population of vultures! 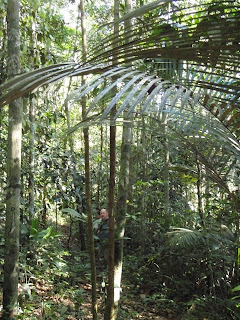 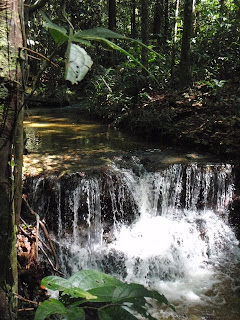 The morning of the 10th we went for a fairly long hike through rainforest a short boat ride away from the campsite. We started more or less in somebody's back yard, and the land was almost completely cleared; then we reached the forest edge, and were in thick, dense secondary forest (you can see how crowded it is in the photo, and how all the trees are thin and young; primary forest is not like that). We hiked perhaps a mile or so to a small waterfall in a pretty little natural clearing, and hiked back on the same trail. It was one of the nicer hikes I've done in the Amazon, actually; it was a good trail, and there was lots to see. 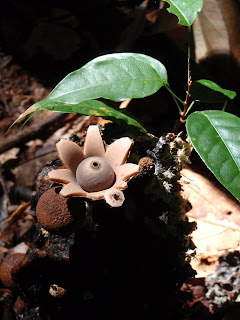 Strange fungi were everywhere, in all sorts of colors and sizes and shapes. 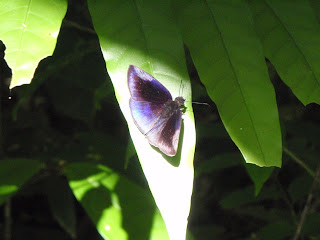 Beautiful butterflies flitted about, almost never landing for more than an instant. A completely bizarre spider, whose body was flattened like a big tick, managed a complex web next to the trail. A large weevil stood motionless on a tree trunk. 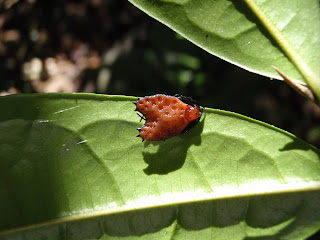 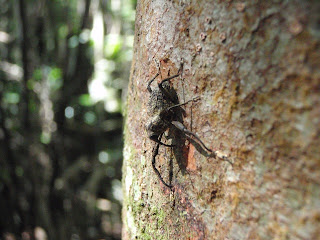 A strange spiky pupa case hung from a thread, waving in the little breezes. 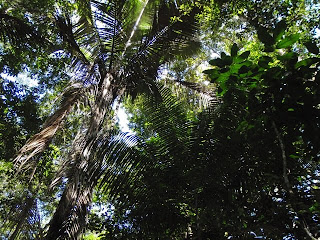 Life is simply everywhere in the rain forest; if you're walking, it just looks like green vegetation everywhere, but if you stop and take a minute or two, you start to see things everywhere you look. Tiny spiders spin webs inside the curling ends of climbing vines. Ants are everywhere, busily transporting things and defending their territories. We saw jaguar scat on the trail, full of fur from some animal it had eaten. Birds call all around you, and you occasionally see flashes of motion in the corner of your eye as they flit from branch to branch. But the life is all either tiny or hidden; you have to look carefully to see it.
Later that day we went to visit an indigenous group near the campsite. We were quite skeptical about it at first; we got there by walking around a trail past shanties with TV antennas playing American music. But it turned out to be quite a remarkable experience. 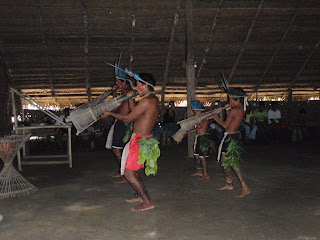 They performed perhaps four or five traditional dances for us, playing a wide variety of traditional instruments (generally one instrument per dance, which seemed to be their custom; the instrument is associated with the dance, it appeared). It was, of course, a performance for tourists, but it also seemed important to them. The women danced with their children on their hips, and the older children were playing instruments and participating; they were being raised within their traditional culture, and they clearly knew the songs well and enjoyed performing them. So it was, of course, motivated by a desire for tourist money (they took donations and sold various handmade products at the end of the performance), but at the same time it felt surprisingly genuine and authentic -- much more so than the indigenous visit we had done through Juma Lodge, although that was neat in its way too. 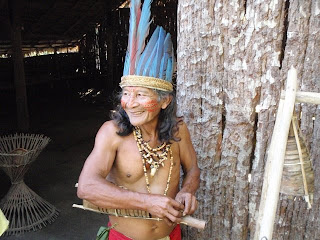 I've been reading a book my mother lent me, One River by Wade Davis, and this visit was interesting from that perspective. The leader of the group said that they were closely related to indigenous groups from Colombia, and had migrated southward in recent times, so they may be similar to the Colombian groups discussed by Davis. The men all had a spray of leaves tied around their waists; I wonder whether those might be connected, in a historical sense, to a tradition of coca-chewing. I don't think they were coca leaves, and I saw no evidence of chewing in this group, but perhaps its symbolic of a past tradition, who knows. Wild speculation. Dr. Ouverney, who has spent a lot of time living with indigenous groups and once took ayahuasca, said that he thought one of the dances they performed for us might have been connected to a traditional ayahuasca ceremony. Many of the other things the chief said reminded me of things I had just read in Davis's book; it was really fascinating.
I took some video of the dances, but the files are much too large to upload from here; the internet connection here is about modem speed. I'll do something with them once I'm back home; watch this blog even after I'm back, as I may post some miscellaneous extras like that.
Posted by Ben Haller at 7:45 AM

The first 2 photos looks like REI catalog :)
very interesting looking bugs. Sarah'd love them.
I want to see the dance!