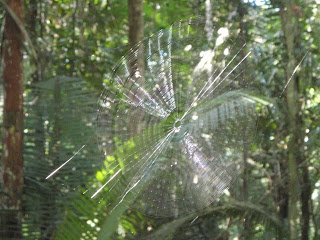 Borrowed a bird book from Bill and Vida this morning. It appears that we've been seeing yellow-billed terns, black-crowned night herons, cattle egrets, wattled jacanas, turkey vultures and black vultures, black-collared hawks, scarlet macaws, blue anis, amazon kingfishers (and perhaps also green kingfishers and/or green-and-rufous kingfishers, but I want to confirm those), either lineated or crimson-crested woodpeckers (I missed the key differentiating characters), and yellow-rumped caciques. Quite a few birds remain unidentified, including the toucans we've been seeing, the various swifts or swallows, and the doves or pigeons we've seen perched in trees above the water, as well as the woodcreeper I've spotted several times outside my cabin. Then there are the vast numbers of small, flitty birds up in the canopy that I never get a clear look at; it would take a better birdwatcher than I to make any progress on them. I think I saw a screaming piha, the bird that makes the wolf-whistle call, near my cabin, but it didn't call while I was watching it, and it's not a distinctive-looking bird so I'm not sure.
The hike turned out to be a long boat ride followed by a very slow machete trek through the forest. Not that I'm complaining; it was my first walk through real primary forest, and it was quite neat. Many very tall trees, including acai palms, brazil nut trees, and several species that smelled absolutely wonderful but whose names I didn't catch. 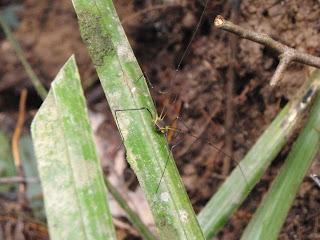 Lots of insect life; dragonflies and damselflies, little fruit flies, a hive of wasps with the larvae exposed and wriggling on the surface. There were lots of small flies that liked to hover in place and that somehow made a white X from their body parts while in flight, perhaps by holding one pair of legs high and one pair of legs low; I wanted to catch one to examine it more closely, but they evaded me. The arachnids were also well represented; we saw a large harvestman with yellow spots on its body, a very large spider that lived in a hole and that our guide lured out for photographs using a stick in a way that the spider seemed to think was prey, little jumping spiders, and a tick that I found crawling up my clothes. 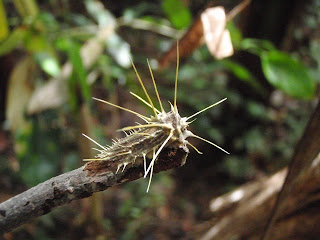 One strange thing I saw was what appeared to be a spiky caterpillar metamorphosing into a moth without benefit of any sort of pupa. I don´t recall ever hearing of such a thing before. I put the photo here; can anyone enlighten me about this?
At one point in the hike our guides stopped to show us how the palm fronds are used; they did a quick demonstration of weaving a roof and a basket, and then made all of us little things out of the fronds. I got a star, suitable for use as a Christmas ornament; Vida, who is always everyone's favorite, got an ornate and quite realistic grasshopper made entirely of folded fronds! They don't use the mature fronds for this sort of work; instead, they cut off an inner frond that had not yet unfolded, and separate its leaves by hand. Those fronds are very clean and new, and feel very much like plastic, not like vegetable matter.
The birdwatching on the boat ride back was quite good. We saw several old favorites, plus a blue-crowned trogon and a paradise jacamar, both beautiful birds. Birdwatching in the Amazon is a bit easier than elsewhere, because so many of the species here are brilliantly and distinctively colored; even an ignoramus like me can't help noticing and identifying a blue-crowned trogon! We also saw several blue morpho butterflies that came quite close to the boat; they really are stunning, but they never seem to stop and land so that you can admire them. 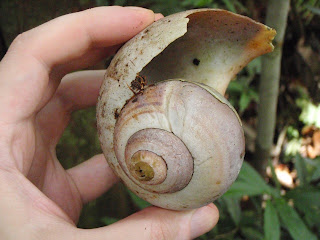 A huge land snail shell amazed everybody, but we never saw a live one, just the shell, in which a spider seemed to have taken up residence. A couple of capuchin monkeys were moving around in the trees far away, but nobody but the guide ever got a clear look at them; we just saw flashes of motion among the leaves.
Now it is muggy and sweltering. I'm typing in my underwear, and even that feels like too much exertion, so I'm going to go lie down and read.
Posted by Ben Haller at 1:15 PM