Brazilians like acronyms. We are at a FUCAPI-affiliated facility today, learning about a research project called Piatam (Inteligencia Socioambiental Estrategica da Industria do Petroleo na Amazonia). A 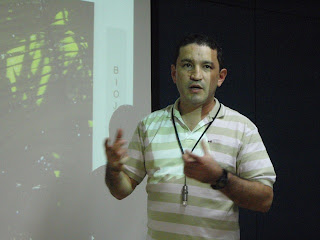 fellow named Alex, a professor at a local university and director of the Piatam project sponsored by Petrobras (the third largest oil company in the world), is talking to us. Piatam is a very large research project started in 2000, with affiliations with many institutions including FUCAPI, INPA, and others both within Brazil and internationally. It is an interdisciplinary project involving many researchers. The objective of the project is to "do the environmental characterization of the Petrobras-controlled area... in the Amazon, building time-series data needed for environmental monitoring... for sustainable actions in the business of Petrobras." The main idea, then, is to survey and build a database of environmental data characterizing the Amazon region in an organized and planned way, in order to be able to minimize environmental impact. They do a lot of environmental modeling of the behavior of the Amazon using mathematical, computational models. The project is also very involved in "social inclusion," meaning helping to improve living conditions for people in the Amazon region (indigenous and otherwise): improvement of health, education, and income increases among ordinary people. They do not actually distribute medicine or money; they try to improve infrastructure and promote self-sufficiency.
They have more than 200 researchers, including doctors, students, technicians, administrators, and so forth. They work from Manaus westward along the Rio Solimoes to a major Petrobras oil extraction site on the Rio Urucu, a Solimoes tributary. Petrobras is exploring for oil about 200km to the west, which would expand Piatam's area of research; they are also contemplating building an oil pipeline through this area of the Amazon, which would similarly expand Piatam's area of interest. Downstream from Manaus, they are involved with the area all the way to the ocean, where Petrobras has offshore oil platforms. Various other areas are also exploited by Petrobras; Piatam is involved in all of those areas. So Piatam's operations are closely tied to those of Petrobras.
Piatam's work is subdivided into economics and management, modeling of the environment, social economics and ethics, archaeology, history, the environmental/physical study of soils, geology, and hydrodynamics, fish ecology, aquatic macrophytes, fish larvae, environmental toxicology, entomology, ethnobotany, mammals, tropical diseases (particularly malaria), information technology, communication with the public, and, of course, management. The data they collect is not currently public; there are issues surrounding the fact that the data was sometimes gathered by affiliates, not by Piatam itself, and some researchers don't want the data to be public because they want to reap the benefits of their work in their own published papers, and the geological data, for example, has proprietary importance for Petrobras, and there are patent issues surrounding some ethnobotany data, and so on. But the management of Piatam would like to make the data public; Alex says that it is recognized that they can't possibly do justice to the data they have gathered otherwise.
They started with just one small boat and twelve researchers; they now have two large boats that can carry 55 people at a time. They gather data four times a year, to assess seasonal changes, and visit nine communities that they work with along the Solimoes. Individual groups, such as the malaria team, go out more frequently to gather data that can't be done on those four main trips. The showed us a picture of a researcher who acts as "human bait" to attract mosquitoes for collection; that man has gotten malaria four or five times now, and is happy when he gets bitten five or six hundred times per hour. Some of Piatam's work will be featured in National Geographic in August 2008 in a four-page article.
Now we're getting some more detailed talks on research projects at Piatam. I won't take notes on them in detail, just list the topics: 1) Classification of high-resolution images from the IKONOS satellite for the area of the Nossa Senhora de Nazare community, 2) Fish ecology in floodplain lakes on the Solimoes, 3) Hydrodynamic modeling, 4) Use of a graph model for resolution of conflicts and disputes among Amazonian fishermen.
We're 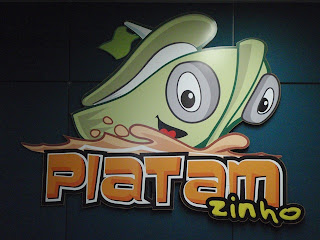 all feeling a bit skeptical about Piatam, given its primary source of funding and its close connection to the oil industry. We haven't pressed them on this issue, since the people we've been talking to are researchers, and we don't want to put them in an uncomfortable position. The manager who presented at the beginning, Alex, had to run to another meeting as soon as he finished talking; I had wanted to ask him how he felt the research was affected by these issues, but I didn't get the chance. Their educational program for kids, Piatamzinho, is particularly suspicious; we all know what programs like this are really like in the U.S. Hard to say whether Piatam has the same issues or not, from what we've heard.
Now we are at INPA hearing talks from some researchers here. We wandered around INPA a little first, and had lunch there; I got some pretty good photos of some semi-wild 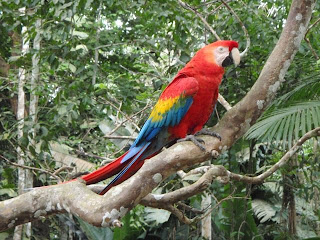 macaws that live in nesting boxes at INPA, which was neat. They really are spectacular birds; it was quite exciting seeing them in something resembling their natural habitat. We also got our closest look yet at monkeys up in the canopy; again, they are only semi-wild, this time in the sense that they do raid INPA garbage cans and such, so they are habituated to humans and probably somewhat dependent upon them. Still, very fun to see them leaping from tree to tree. I have no idea what kind of monkeys they were.
Now 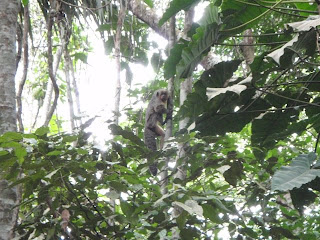 we are in another auditorium, hearing about MEGA (Monitoramento Ecoambiental do Gasoduto no Amazonas). This is a research project to see whether the installation of a gas pipeline in the Amazon affects the environment in the area. The pipeline will run from a Petrobras station west on the Solimoes, downriver into Manaus. The pipeline will be several hundred kilometers long, and will pass through many of the same areas monitored by Piatam.
The next presentation is on the Biotupé project, which surveys the biological, social and cultural diversity of Tupé's RDS (Reserve of Sustainable Development). This is a project we will be visiting next week and camping at overnight. An RDS is a protected area associated with the sustainable use of its resources, by its local communities, in order to preserve biodiversity. The Tupé RDS is about 30km up the Rio Negro from Manaus, and is almost as big as Manaus itself (approx. 12,000 hectares), with six rural communities inside it of about fifty families each. There is a lake, Tupé Lake, in the reserve, with white sand beaches (at low water) and black water like the Rio Negro (i.e. tannic and acidic, with low nutrient content). It's a very beautiful spot, and a popular tourist destination; its designation as an RDS is, among other thing, motivated by a desire to preserve the area against the onslaught of tourists. The Biotupé project is affiliated with several other local agencies, universities, and institutions, and has members including social scientists, journalists, and architects, not only biologists. They look at vegetation, hydrochemistry, hydrology, zooplankton, phytoplankton, aquatic insects, benthic fauna, fishes, use of natural resources, sponges, fungi, education, sediments, income promotion, local community organization, and education of youth in science. These programs all seem to have remarkably broad goals! Their website is http://biotupe.inpa.gov.br, but I don't know if any of it is in English.
Now we are going to have a couple of student presentations, which I'll post separately as usual.
Posted by Ben Haller at 9:20 AM

I don't read this blog yet. I've been working a lot and don't want to read Not-too-fun-thing-for keewi stuff.
I will read as soon as I have time and mental capacity for lectures and stuffs...:)