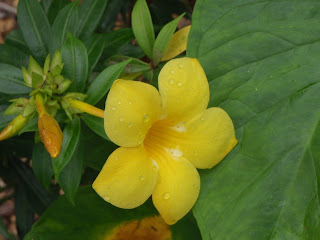 This morning we went to a botanical garden in a larger biological reserve called the Jardim Botanico Adolpho Ducke. Ducke was an Austrian naturalist and conservationist in Brazil in the 1940s and 1950s who came to be prominent enough to have a reserve named after him. The botanical garden was established quite recently, in 2000.
I took a few flower photos, but mostly pictures of insects. The insect-watching was virtually unparalleled. Pretty bicolored grasshoppers and little orange bees were abundant before we went into the jungle. A blue morpho butterfly seemed to like the margin of the jungle a lot, and flew in and out of the trees repeatedly, eventually settling into a pleasingly photographable behavior of hopping along the ground and slowly opening and closing its wings for no discernible reason 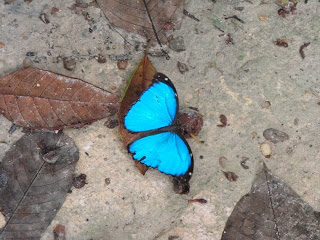 . Our guide through the park pointed out a remarkable spiny green caterpillar on a leaf. A species of dragonfly with black-tipped wings liked semi-open areas within the forest. Lots of different species of ants were running around, including a very long-bodied, elegant ant and a huge vicious-looking ant well over an inch long. A large assassin bug sat still on a leaf, perhaps waiting for a victim, while on the underside of the same leaf a huge tan and black spider lurked, perhaps considering making the assassin bug its lunch. Leafhoppers abounded: a small bright red and turquoise species, a yellow species, and a very camouflaged brown species. A huge crane-fly sat on a tree trunk, the joints of its legs elegantly set off in contrasting white. There were lots of fungi too, as always, but the only ones I photographed today looked like little satin umbrellas. 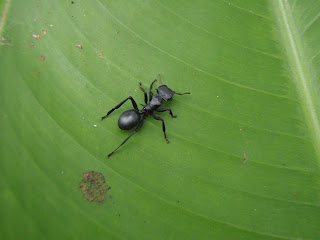 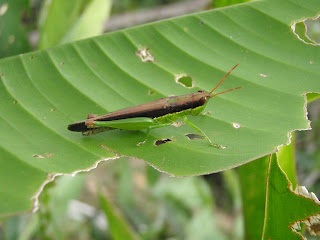 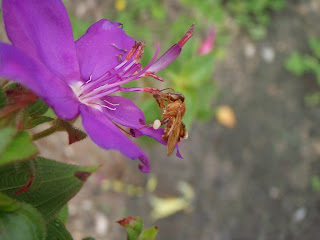 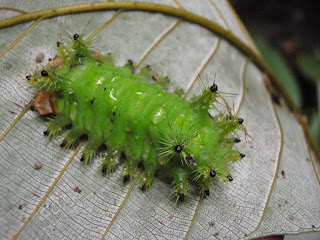 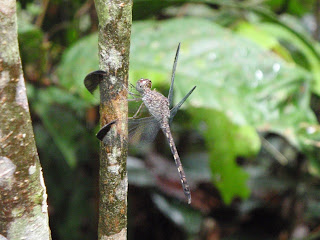 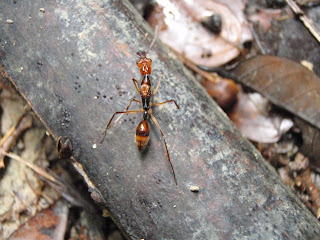 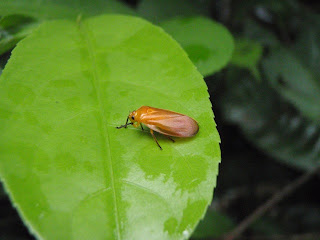 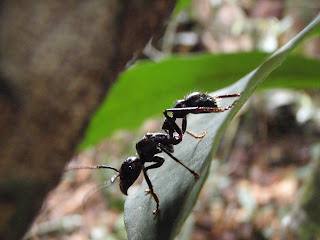 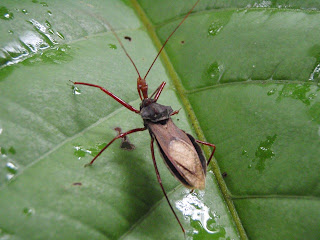 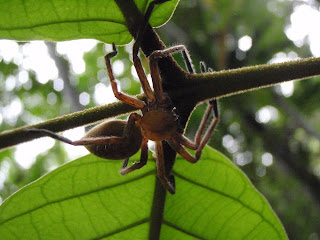 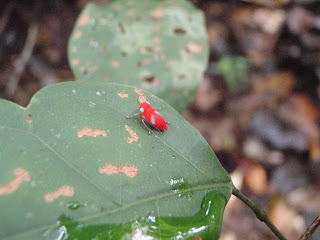 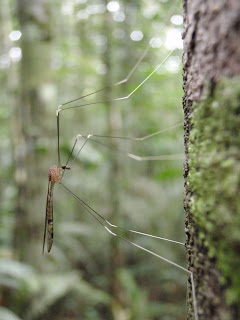 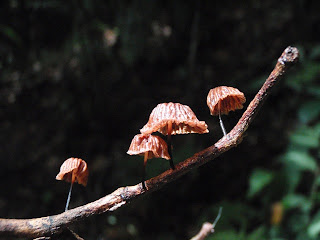 In the afternoon we visited a museum dedicated to the indigenous peoples of the Amazon, the Museo do Indio. Photographs were prohibited in the museum, so I can't show you any of the things I saw (why is it that bureaucrats are so hostile towards photography?), but I can describe a bit. 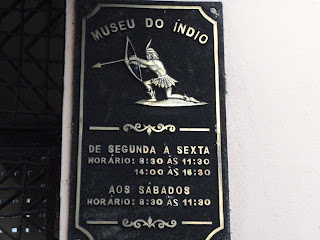 They had displays of pottery, weaving and basketry, dwellings, musical instruments, and dioramas of funeral rites and of Amazonian animals. The taxidermy in the dioramas and displays was shockingly bad -- desiccated and moth eaten birds, contorted squirrels nailed to branches -- but I suppose it's the thought that counts. Some of the displays supported the authenticity of the dance performance we had seen courtesy of INPA a few days before; they showed a large ceremonial house exactly like the one we had been in, and musical instruments like the ones we had heard, and clothes like the ones we had seen worn. They even had photographs in the museum of dance ceremonies in which the men wore the same bright-colored boxing shorts they were wearing when we watched them; those boxing shorts must have been an early cultural transfer from the West! It was nice to see that the ceremonies we had observed hadn't simply been made up from whole cloth for the benefit of tourists. There were also several things that underlined what I've been reading in One River; we saw a very large pot into which people spit chewed fruit, which is then fermented to make an alcoholic beverage, for example. There were a lot of pictures and artifacts from the Yanomami, which was good since Dr. Ouverney had spent time living with them; he was able to vastly supplement the rather threadbare commentary on the signs in the museum with additional information and personal stories.
One thing Dr. Ouverney commented on was how hard the women in indigenous groups often worked. They usually do not get to eat until after the men and the male children have eaten their fill, so they often suffer from malnourishment. At the same time, they do much of the work in the society; Dr. Ouverney says you rarely see a woman who is not carrying a baby on a sling at the same time that she is carrying a load of some kind in a bundle hanging from a strap around her forehead. These stresses combine to produce short lifespan and high mortality, particularly during childbirth. One River, the book I'm working on, speaks to this from a different angle: in the group Wade Davis describes in the part I've been reading, the women are responsible for cultivating and harvesting the coca leaves that are central to their culture, but only the men are allowed to chew the leaves.
Posted by Ben Haller at 6:08 PM