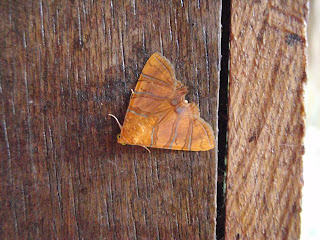 Woke before dawn to the sound of howler monkeys in the distance, and enjoyed the slow emergence of dawn with all its sounds. One sound this morning is the sound of music playing in the distance, unfortunately; but it's soft, and doesn't completely obscure the forest sounds. Some tourist party boats went by the lodge yesterday morning and evening, playing load music and making big waves that made the buildings here sway. Amazing that even here one can't escape that sort of thing.
Breakfast is in a little less than an hour, and then we are going on a hike through the forest on Juma Lodge land. They own a lot of land here -- 160,000 hectares, if I recall correctly -- and it is all primary forest, untouched by the loggers. That's a very rare thing anywhere near Manaus! We have been enjoying seeing the big, tall trees that rise above the main canopy; many of them are brazil nut trees, which are protected now by law, but there are others, too, whose names we don't know. Many of the birds really like the tallest trees, for their high vantage point and, I presume, their relative safety from the risk of snakes and such; it is easy to see how logging out the tallest trees would cause immediate harm to the ecosystem, even when the remaining forest still appears dense and healthy. The tallest trees, when they die, also provide the snags that the vultures sit upon; and since they are different species than the lower trees, if they are logged out, those species are no longer represented in the forest at all, so all the species that are closely dependent upon them will become locally extinct.
On a different subject, four new guests arrived yesterday: a couple from Zurich, an older man from Germany, and a mid-thirties woman from Houston who rarely speaks. None of them seem particularly interested in nature, oddly; I'm mystified as to what they are doing here. A big hawk moth (a.k.a. sphinx moth) was on the netting in the dining room last night, and none of them stirred a muscle to look at it; and when we all went out in the boat yesterday, they seemed to take no interest in the birds we were seeing, and didn't want to borrow binoculars to look at them. One of the mysteries of life, I guess. The couple from Zurich was just at the Pantanal, a wetlands in the south, and perhaps the birdwatching here is just boring compared to how it was there; they said they took over 500 bird photos there in just a couple of days.
The record of amazing wildlife right outside my front door in the morning remains unbroken; within seconds of walking outside, a toucan flew by within fifteen feet of where I stood. Remarkable. It feels like being on the Truman show, like somebody somewhere is watching me and saying "He's approaching the door; cue toucan flight sequence...".
I still smell like monkey this morning.
Posted by Ben Haller at 6:10 AM