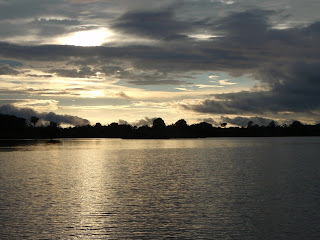 Well, the dolphin-viewing was great fun. The guide said he saw a pink dolphin, but I don't think any of the rest of us did. They surface in a very subtle way, sort of rolling over smoothly while hardly breaking the surface; unless they want you to see them, you're unlikely to (although you can hear the sound they make blowing out their blowholes). But we did see other river dolphins, which behave in a more typical dolphin fashion, breaking the surface in a hunched, circular motion with a very visible dorsal fin. We probably saw a dozen or so of them, some swimming in twos and threes, others solitary. Many of them had distinctive markings that let us identify them, but it was very hard to follow any particular dolphin; they swam underwater for a very long time before surfacing again. I didn't even attempt to take pictures of them with my little camera; with the zoom I have on that camera, the dolphins would have looked like just another wave on the lake. But the binoculars I mentioned before -- Canon 15x50 image stabilized all weather binoculars, they don't seem to have an identifying name that I've found -- turn out to be fantastic. The image stabilization works very well, and their magnification is sufficient that I could clearly see birds -- well enough to identify them by plumage -- that I literally could not see with my naked eye at all. The stabilization helps a lot with that; all the uncertainty that comes from hand shake is gone. It's like looking at a still photo. I highly recommend them for any birdwatchers reading this.
Anyhow, enough plugging for Canon. We saw not only dolphins, but lots of birds, and it was a beautiful day for being out on the lake; not too hot, overcast enough so the sun wasn't glaring, but still fairly bright and sunny. We would motor for a bit ("canoe" meant a small uncovered boat with an underpowered motor, as it turned out), coast and dolphin-watch, then when the dolphins had moved on to other areas, we'd motor a bit more to catch up with them. We did that for perhaps an hour and a half. 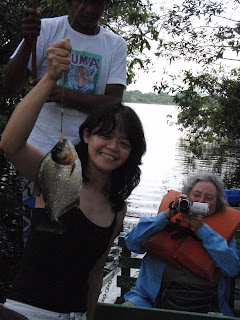 Then we found a little alcove and tried to fish for piranha. Each of us got a pole (a long stick) with a line, a hook, and some beef for bait. We dangled the poles in the water for a while, but nobody got so much as a nibble. There was a beautiful bird high in a tree quite a distance away that I watched for quite a while, deep prussian blue front and wings, with iridescent turquoise feathers along its back that sparkled and rippled beautifully; I have no idea what it was. Eventually we moved on to a different spot, which proved much more successful piranha-wise. I got lots of tugs and nibbles on my line, but didn't manage to hook one; but Amanda, one of the two Asian girls (Filipino, as it turns out), caught one and got it into the boat. We all took photos of her with it, and then we fished a while more but didn't get another. 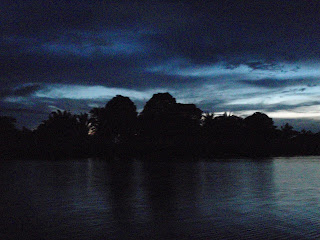 We motored back to the lodge just after sunset, with night falling fast over the lake. Even spending dusk on the water's edge, we never saw a single mosquito. Amazing.
Dinner was a soup, some lasagna-like pasta, tambaqui (a local fish), chicken and potatoes, rice, and what seemed to be more or less the filling for key lime pie (yum). AND: piranha! They grilled the one Amanda had just caught and served it for dinner, and it was really quite tasty; I'd say it was every bit as good as the other fish we've been eating. Perhaps it's not commonly eaten in the area because the bait (fresh beef is what we used) is expensive, I don't know.
Now I'm in my room, and the frogs and being very noisy outside. It's a wonderful cacophany; I can hear at least half a dozen different species just by the different sounds they're making. I'm going to stop typing soon, though, because I want to get back to reading the book I've just started, One River, by Wade Davis. It's about the Amazon and the experiences of several famous and not-so-famous biologists exploring it, I gather; I haven't really gotten into it far enough yet to quite know what it's really about, but it's a great read so far. My mother highly (very highly!) recommended it to me, and so I brought it along to read when I got a chance -- which would be now. Good night!
Posted by Ben Haller at 8:10 PM

the very last photo is really nice too. Ue an food photo? ueueueue.. you should've took a photo of the grilled pirana!