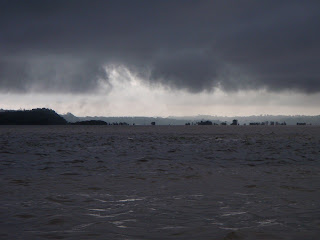 here I am at Juma Lodge. So far it has been better than expected. We (Bill, Vida, and I, plus the driver) rolled out at 7 AM, after some last-minute packing, and drove to one of the usual boat launches, next to the fish market. A quick boat trip (20 minutes?) got us across the river with views of distant storms on the horizon. Then we transferred to a minivan, and drove in that for a fairly long time, perhaps an hour or a bit more, making numerous stops: we gave a woman a ride from the marina to somewhere nearby, and got gas, and stopped at a roadside butcher shop but deemed the meat unacceptable, and stopped several times to take photographs of scenic spots. The landscape was 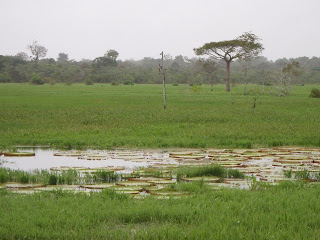 flooded forest for the first part of the drive, with treetops sticking out of the water and quite a few giant water lilies. Further on we perhaps gained a little elevation, and got into ranches and pasture. The cows were a different breed than one sees in the U.S., bony and white; I want to call them Brahmas, but I have no idea if that's correct. Anyhow, eventually we turned onto a side road of 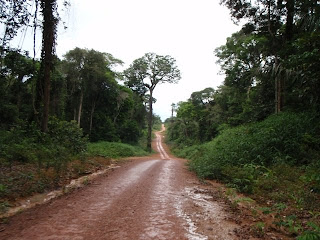 red dirt and drove a little further, emerging at a little 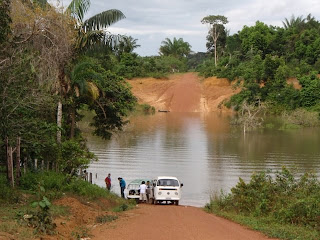 boat launch. After a brief wait a boat appeared, our gear was loaded on, and off we went. This was a smaller boat than before, and fairly maneuverable, and the driver clearly enjoyed his job; he zoomed at high speed between treetops and overhanging branches, generally only slowing down to give us opportunities to photograph. 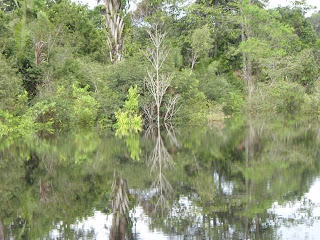 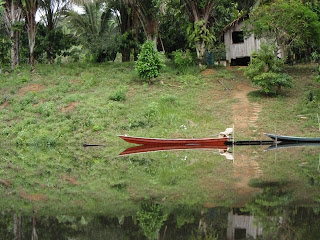 And opportunities to photograph abounded; birds were everywhere, in particular. There had been lots of birds since we first got to the south bank of the Solimoes, in fact: kingfishers and egrets and vultures similar to California's turkey vultures, and smaller white birds that like perching in the trees, and a 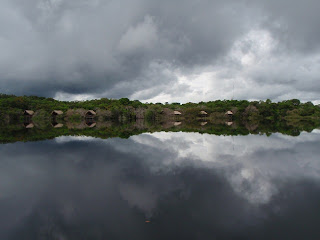 pair of fairly large eagles (perhaps the size of golden eagles) in the top of a tree by the river, and speedy little black and white streamlined birds that liked to fly alongside our boat, and ducks and something that looked like a cormorant, but with creamy white feathers and a colorful head. I brought my spiffy waterproof image stabilized binoculars on this journey, which I haven't tried using yet (they're a bit heavy to carry on long day hikes and such); I hope to see some amazing birds with them from a canoe this afternoon!
Finally we saw Juma Lodge in the distance: a row of little cabins on the river with balconies and thatched roofs. 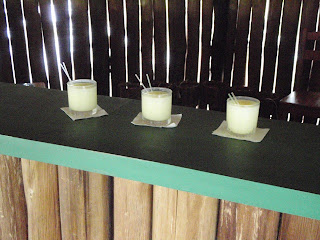 One of them turned out to be Bill and Vida´s and one mine. We pulled up at a small dock, unloaded, and were immediately served glasses of cupuaçu juice that was very tasty after the long boat ride! It was raining fairly hard, so they escorted us to our rooms with big umbrellas along wooden walkways under the trees.
At that point in my typing, I got up to take a few pictures of the cabin for the blog. When I opened the front door of my cabin, there were two small Saki monkeys sitting right outside, which were not nearly as surprised to see me as I was to see them! They don't seem afraid of humans at all, but I don't think they're tame, either. They didn't beg for food, and weren't particularly interested in me; they were just hanging out on my front step, I guess. They seem very sad because they habitually don't look up; they are always gazing down at the ground, and they move slowly and carefully, so they have a morose air. 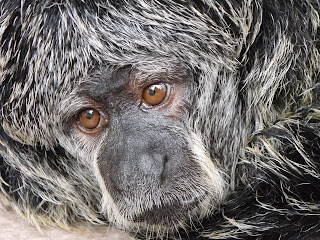 They let me take photos of them, and when I held out a finger, one of them took it and held it for a while. Remarkably soft, dry palm; it did not feel like a human hand at all. They made little eye contact, and weren't interested in my camera, but they let me take very close-up photos of them. I was really quite a remarkable experience, and quite unexpected!
A little later it was time for lunch. It was served buffet-style: rice, beans, fish, chicken, boiled eggs in a tasty tomato sauce, and fruit salad in a milky base that was quite unusual and good. The dining room is a big cylindrical structure with mosquito netting around the margins and a tall pole in the center; everything here is on posts fifteen meters tall, in order to get it above the water in the wet season. The highest water level this year is right about now, we're told, so the water is close to the bottoms of the walkways and buildings; in the dry season, it's all fifteen meters above the ground. It all feels solidly constructed, but at the same time, being made of wood and being fifteen meters above the bottom of the river, there is always a little flexure in things. You feel a slight swaying from time to time, very subtle and disorienting. 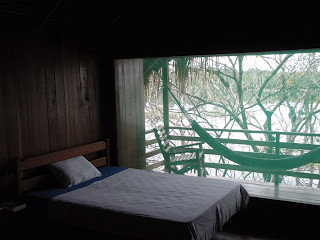 The buildings are very simply constructed out of wood and palm fronds here, except for the green mosquito netting; it is not quite rustic, but you can see the water through cracks in the floor. It's quite peaceful and beautiful. Right now it's very quiet; all I can hear is a gentle lapping of waves, occasional bird calls, the sound of dripping water, and my own typing and breathing. My cabin looks out over the lake, which is quite still; there hasn't been a powerboat on it since we arrived.
We met various people at lunch: a young man from Texas who just graduated from college and gave himself a trip to the Amazon as a graduation present, a German man and Brazilian woman who live in Boston and come down to Brazil for vacations regularly, and two Asian women who I didn't really meet since they were at the far end of the table. Everyone was very friendly, and we're the only ones here; it's not a big place to begin with, and the high-water season is not the tourist season anyway. Bill and Vida and I were slated to share a triple cabin, but the staff put us in a double cabin and a single cabin at no extra cost, since they have the room to spare anyway. There are only three people working here at the lodge, as far as I can tell; we met lots of drivers and support people on our way here, but nobody came on the final boat with us except the driver of that boat.
At lunch a 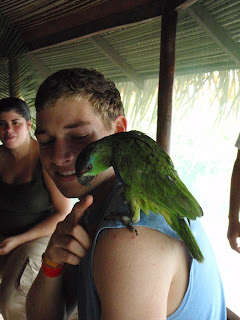 parrot got into the dining room, apparently a familiar occurrence. It hopped from person to person and evaded capture until one of the staff lured it away with a chicken bone and got it outside again. Then it sat on the other side of the mosquito netting and made little mournful noises for the rest of the meal. There is also a baby common wooly monkey here, named Lily if I heard correctly; she's two months old, and was apparently bought from some indigenous people who had killed her mother for food (I later found out). Lily has been adopted by the Juma staff, and just runs around being unbelievably cute and acrobatic. I hope they know how to feed her and take care of her; she looks quite healthy and happy, anyhow. She doesn't generally mind being picked up, although she's incredibly squirmy; if you hold her for longer than she wants to be held, she makes that quite clear with ear-piercing shrieks, while if you hold her in an uncomfortable way, she lets you know that with gentle little nips. I held her briefly; Bill got the photos on his camera, so I don't know if they'll make it into this blog.
It's very humid here, but no sign of mosquitoes. Apparently this river is a black water river, like the Rio Negro; it's tannic and acidic (pH 5.3, I think someone said), and so the mosquitoes can't breed in it. We didn't expect that at all; we had been led to believe that the Solimoes and all its tributaries were white water, but apparently, and happily, that is not the case for this particular tributary, at least. So far this entire trip to Brazil I have put insect repellant on only once, and I think I've been bitten only one time; part of that is due to the fact that mosquitoes don't like me anyway, but most of it is due to being on black water, as is the case in Manaus as well. I expected to be absolutely inundated by mosquitoes this whole trip; I'm very glad it isn't that way!
At "3:15 or 3:30" we are supposed to go out in canoes (or one big canoe, I don't know) on the river. We're hoping to see boto, the pink Amazon river dolphins that Bill talked about earlier in this blog. We will undoubtedly see birds, and apparently it's common to see crocodiles and various other wildlife (tapirs?) as well. I'm having a great time here so far; we knew very little about what we had signed up for before we got here, due to the language barrier, but it's turning out remarkably well.
Posted by Ben Haller at 11:45 AM

Monkey so cute~! I want to see the 2 years old one too...
The photo , water and green forest one - absolutely stunning. It looks like you just fold in half, open and took a photo!