Most of the group left this morning at 6:30 AM on a long trip up the river to try to see boto, the pink Amazonian dolphins. I had seen those on my side trip at Juma Lodge, and it sounded like a very long time in a bus both ways, and the dolphins they would be seeing weren't wild dolphins anyway, but semi-tame ones accustomed to regular feeding by humans. So I stayed in Manaus and bopped around with Dr. Myatt instead.
First we caught a bus back to the Parque Mindu, which had seemed like quite a neat spot. We had gotten rained out there when we went as a group, so Rod and I wanted to try to see it again. We caught the right bus at the bus stop near our hotel, but it was the wrong bus stop, so we took that bus all the way through the downtown area before heading back out, passing the bus stop on the opposite side of the street from where we had caught it, and on northeast towards the edge of Manaus. After a bit we got off and transferred to a second bus which would actually get us to Parque Mindu, and that went pretty smoothly. The buses here are not quite as much of a mystery as they were at first; we now know how much they cost (2 reis, or perhaps $1.50), how to get the bus you need (ask a local, there are no route maps anywhere), how to get off where you need to go (ask the fare collector to warn you, street signs are almost nonexistent and the routes are very complex), and how to avoid being flung about like a sack of potatoes (adopt a very wide stance and hang on with both hands).
Parque Mindu was quite pleasing on the second visit. Since it was Saturday, there were tons of children running around everywhere, but they were well-behaved, so that was fine. As usual the easiest thing to see was insects: a new kind of dragonfly, damselflies in abundance near a small stream, a little yellow beetle (I point it out because it is almost the only beetle we've seen in the Amazon, oddly), lots of caterpillars including one species that seemed to make little houses for itself out of a rolled leaf and then forage from that home base, very handsome little multicolored grasshoppers, and paper wasps buzzing around a little nest they had built. We saw leaves that had been eaten my leaf miners, little insects that actually burrow around within the leaf between the upper and lower layers, leaving winding tracks behind. A huge wasp terrified and fascinated us; it sounded like a helicopter when it flew away. There were spiders in abundance, and little white moths that like to hide in large groups on the undersides of leaves. A strange vine with an undulating, creased surface hung across the trail; even Dr. Myatt, who knows more about plants than I know about everything else in the world combined, found it remarkable. 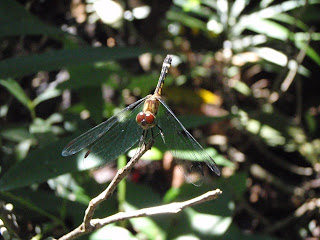 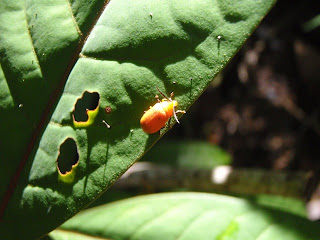 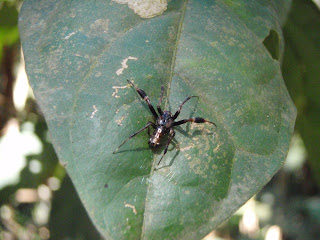 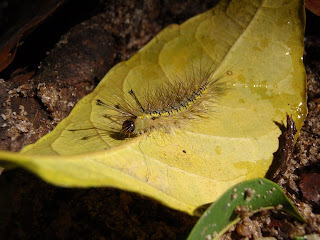 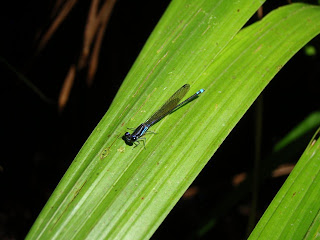 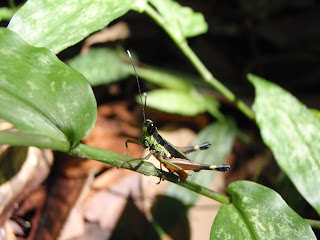 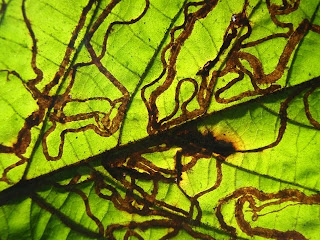 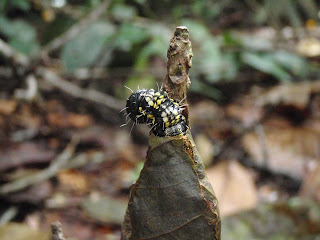 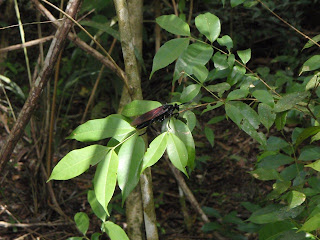 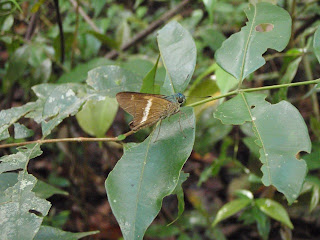 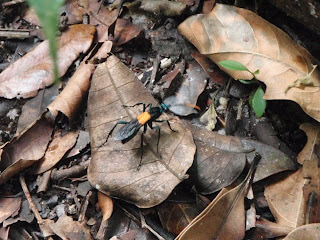 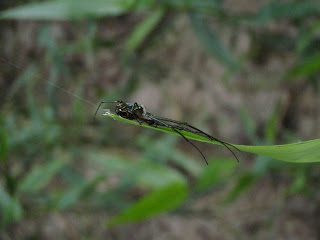 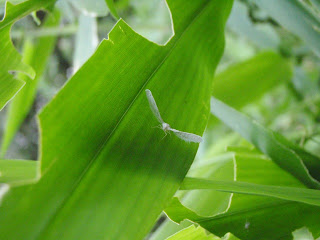 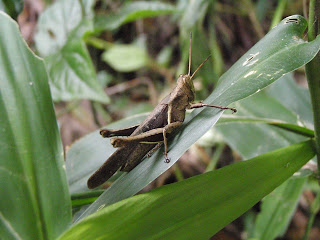 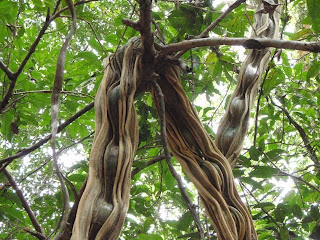 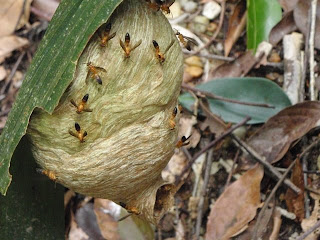 The crowning glory of our visit, however, was our sighting of the little monkeys that reside in the park, the pied-faced tamarin monkey. If I recall correctly, they are native to the Manaus area, and live wild in the park (and almost nowhere else). They were quite small, not particularly afraid of us, and fairly noisy. They were foraging in the canopy, and ran up and down the trees, hopping from branch to branch with great agility. At one point I was only perhaps three or four meters away from one, but of course I didn't get a good photo then; the photo here is one from a rather larger distance, of a more cooperative monkey. 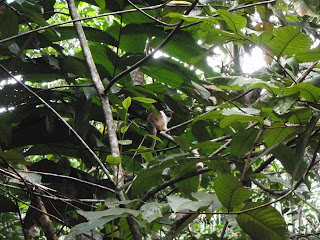 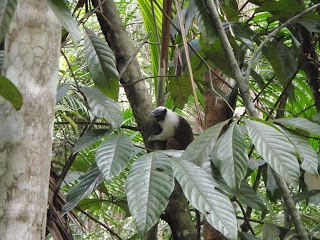 So that was really neat. There is an orchid house at Parque Mindu too, but a quick look revealed that it was small and none of the orchids were blooming, so we skipped that. After a little drama with losing a pair of glasses (and then finding them by retracing our steps), and getting caught in a sudden downpour (when we serendipitously took shelter in a spot where they were giving out free popsicles to the children, and then to us), we walked out and caught a bus down to INPA.
We have been to INPA many times this trip, so we had a clear mission. Agenda item #1 was to see whether the river otter was more active this visit, and indeed he was; he was having a grand time in his water tank flipping around a little blue plastic water bottle cap. He would toss it in the air, catch it on his nose, chew on it, bat it around, and then deliberately fling it through the bars in front of the enclosure in order to involve the humans in his game. We would dutifully pick it up and toss it back in to him, and he'd do some more antics and then fling it back out to us again. He was absolutely charming. On the other hand, I had my camera inside his enclosure, between the bars, to photograph him, and at one point he made a sudden lunge for it, and if I had been just a hair slower I suspect he would have both gotten the camera and drawn blood. After that we noted his sharp claws and teeth and his very muscular arms, and kept our distance rather more respectfully. 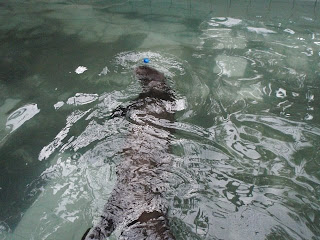 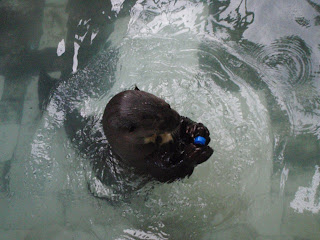 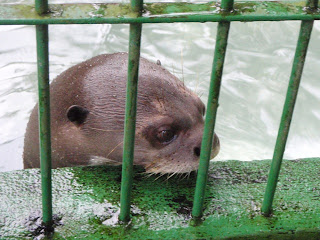 Agenda item #2 was to go back to the indigenous crafts hut to buy more jewelry and such from them. Since we're coming up on the end of the trip, we're trying to make our money come out evenly so we don't have to exchange any reis back to dollars, so we estimated how much we would need for expenses through Sunday night, and blew the rest on their beautiful necklaces, bracelets, belts, earrings, and so forth. 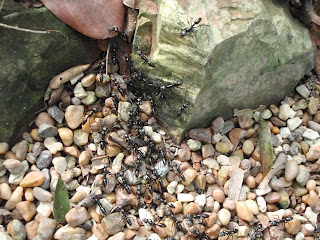 That spot has the best and most varied work we've seen in Manaus, and because it's run by INPA the money is all going to the indigenous people themselves, not to middlemen, so we've tried to buy there instead of in the downtown shops. Outside the hut a little raft of ants went by, so I photographed them; they were probably each about an inch long, and were moving together in a group sort of the way that a flock of birds move. We haven't seen proper army ants on this trip, so this was neat to watch -- still not army ants, but perhaps a little like how they would move. There was no clear leader ant, and yet the group as a whole maintained a direction of travel that seemed consistent and purposeful. Individual ants would stray from the group only slightly before returning, and the whole group of perhaps a hundred ants remained very cohesive and tight the whole time we watched them. Very neat.
Agenda item #3 was a return to INPA's ice cream hut. I got my favorite again, the chocolate and orange swirl. Fantastic. I took a photo of it this time; I think I haven't posted one before. We have been to many ice cream places in Manaus, because Rod has an unbelievable sweet tooth. The other night we popped into a place near downtown and all ordered scoops, but while we were all still working on ours, Rod was back at the counter ordering a second one. 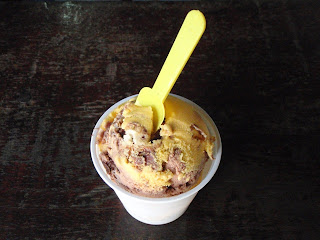 The INPA ice cream is the best in Manaus, though; great flavor and texture, and very friendly service.
Well, we're coming up on dinner time here now. This will probably be my last posting from Manaus, since I fly back tomorrow night, and tomorrow day will probably be spent packing and organizing and then sitting in the airport. My flight leaves at about 4:30 AM, so the logical thing is to go to the airport with the others, who fly out just after midnight, and sit. Catching a taxi at 1 AM would be unreliable and possibly even unsafe, so I'll just read my book and have food and beer at the airport concessions until they close for the night.
I'm glad I'm leaving tomorrow. It has been a great trip, but I'm ready to go home. My legs are absolutely covered in bites, I'm heartily sick of the monotonous food in Manaus (would you like grilled fish or grilled chicken or grilled beef?), my room seems to be infested with ticks (I've lost count of how many I've been bitten by at this point, but it's somewhere around a dozen), and I may even be reaching my limit on how many insects I can photograph without wanting to do something else for a while.
So I'll be in touch back in the States, and as I've mentioned in passing before, I'll probably post various links to movies, other people's photos, presentation writeups, and other miscellanea here for those who are interested. Thanks for reading!
Posted by Ben Haller at 5:02 PM