We all had presentation overload from the past two days, so today was a nice change of pace. In the morning we set out for a rubber tree museum. This entailed taking a bus to the five-star hotel we visited before, and catching a boat from the marine nearby up the Rio Negro perhaps twenty minutes or so. At Keewi's urging, I tried to take a lot of pictures today of what Manaus looks like, what ordinary Brazilians look like, etc.; I'll post some of those here. Older couples were very happy to pose for me. I took a bunch of grab shots out of the window of the bus as we drove, too. Stray cats and dogs are everywhere in Manaus, but they are generally well-behaved; I haven't seen a stray dog bark yet, and the cats are very cute and often friendly. In the restaurante photo, the "x-burguer" and other items are relying on the Brazilian pronunciation of "x", which sounds like "shee"; so that's a "shee-burguer", or a cheeseburger. That's quite common; cheese is represented by an x on menus everywhere. 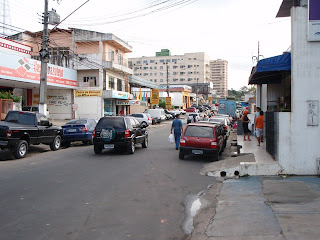 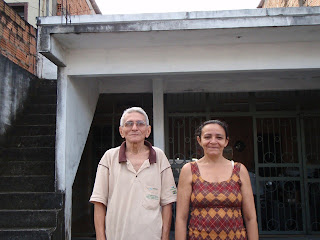 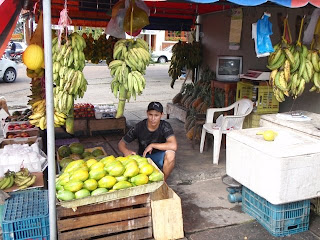 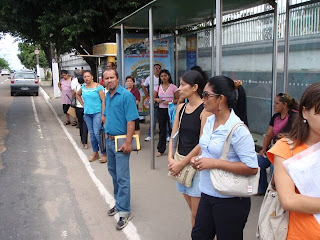 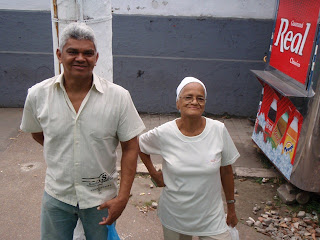 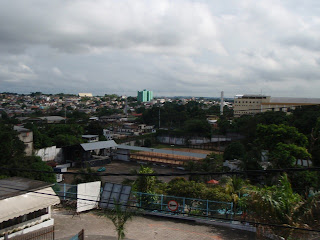 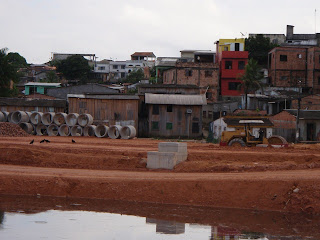 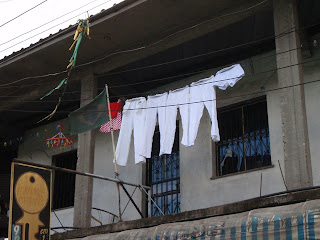 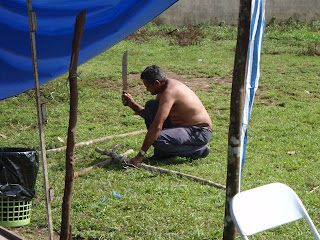 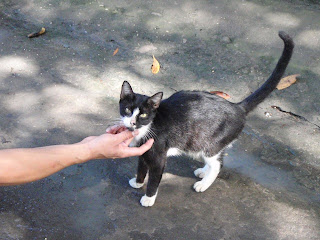 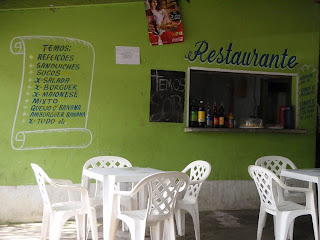 The boat ride was quite beautiful. It was a very clear, sunny day, and the clouds were beautifully reflected in the water. These photos don't do it justice at all. The far side of the Rio Negro has steep cliffs of red earth that you can see in the distance. The Negro is, I would estimate, about the same width as Cayuga Lake here, which means something to those of you familiar with upstate New York. A couple of miles? It's very wide. 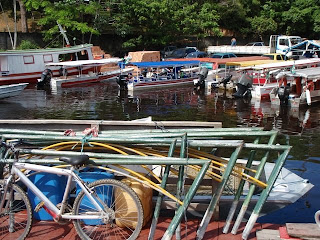 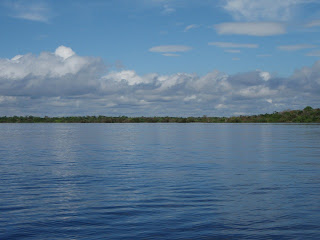 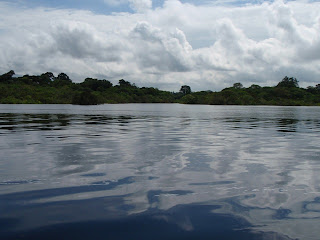 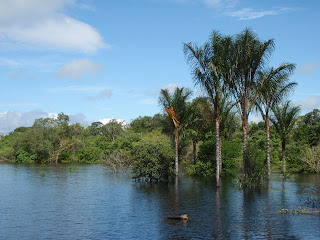 The museum, the "Museu Seringal Vila Paraiso," turned out to be quite nifty. It was set up in the ground of what had once been a rubber harvesting operation. The main house, where the owner of the operation had lived, was well-preserved with beautiful furniture, lacework, kitchen utensils, and even skins on the walls. The owner lived extremely well, by essentially enslaving the people who tapped the rubber, as one of the earlier presentations discussed. The surrounding buildings were also preserved; we got to see how rubber was harvested, by gouging a diagonal slash into the side of a tree, and then we got to see where it was processed and stored and so forth. The living quarters of the rubber tappers were also preserved, and were not, of course, on the same plane of existence as the owner's house.
The grounds also had some beautiful gardens, and a good deal of surrounding forest that we wandered through. Mike spotted a remarkable little caterpillar, and a huge grasshopper (easily eight inches from the tips of the antennae to the ends of the hind legs) was crawling up the side of one of the buildings, and a fruit that looked like lychee turned out to have tiny red seeds like a pomegranate that had a powerful red dye in them that was apparently used by the indigenous people of the area; you can see that it would make a good face paint! 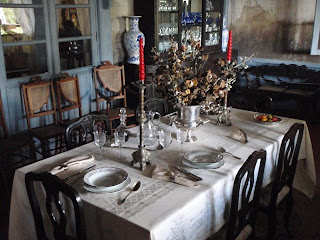 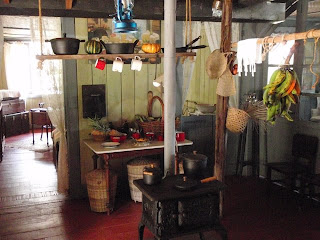 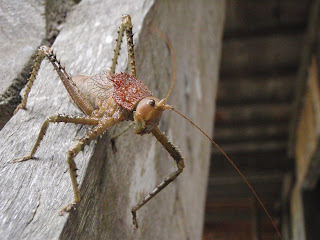 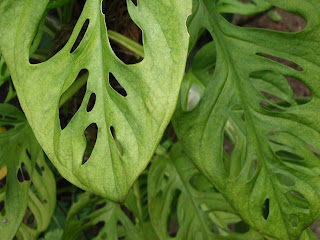 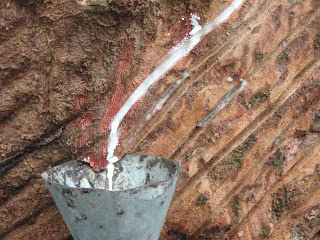 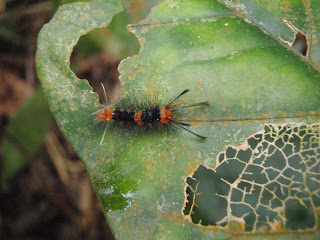 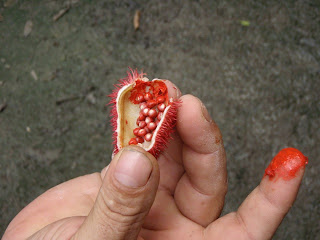 Then we went back on the boat. The rest of the group went in to Manaus to shop for camping gear; they are all going camping tomorrow on the Solimoes, which will be nasty and buggy. Bill and Vida and I decided that we're going to leave tomorrow for an eco-lodge where we will stay until Sunday, so we didn't need to shop for camping gear, so we took a taxi to a natural history museum we had heard about. It was not quite as spiffy as we expected -- our guidebooks really pumped up their insect collection in particular, which turned out to be a bit old and ill-maintained and not that large -- but it was still an enjoyable way to spend the afternoon. They had a big fish collection that I didn't attempt to photograph (the light was very yellow and dim); it was fun to see all the fish we've been eating in the local restaurants, and they had some remarkably strange and wonderful fish in their collection. Then we walked through a small aquarium, the star of which were the pirarucu. Those are the huge fish (five feet long) that we saw being farmed on the Rio Negro a couple of days ago; this was the clearest view we had had of them yet. They have amazing patterns on their heads that look like a cross between engravings and Maori tattoos; I would really like to get a better look at those. Finally we entered the insect collection. They had a few grasshoppers and stick insects and katydids and such, some very odd relatives of cicadas called lantern bugs that I don't recall ever seeing before, various beetles, a smattering of spiders; but a good half of their collection was devoted to butterflies. I took a ton of photographs; if anybody is interested, let me know. None of the insects were labelled with place or date of collection, and some weren't even labelled at all; but the bulk of them at least gave genus and species, and often gave the name of the discoverer. A huge number were credited to Linnaeus, who is of course known for having worked a great many students very hard collecting and identifying species, only to take all the credit for himself. One nice thing about their butterfly collection is that they often mounted a given species both right side up and upside down, so you could see how different the patterns were. 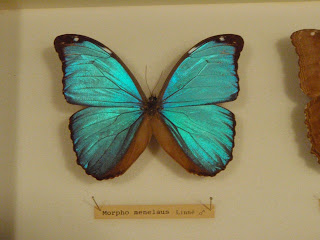 Well, as I mentioned before, I'm off to an eco-lodge tomorrow through Sunday. We leave at 7 AM; I have no idea when on Sunday we'll get back. I'll bring my laptop and blog away over there, but I won't have anywhere to connect, so I'll be out of touch until at least Sunday, or possibly later. On Monday the group, including me, leaves on a multi-day camping trip on the Rio Negro, so I'll be out of touch again; so if I don't have a chance to get to the Internet cafe on Sunday, you probably won't hear from me for at least a week! The spot we're going to is on the Rio Juma; you can find that river to the south of Manaus in the image below. We think we will be staying somewhere on the large lake on the north end of the river. I'm not really sure what to expect; it could be very good, or it could be very bad. Either way, it will be very expensive! 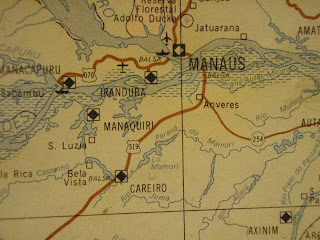 You are the best husband ever! You actually listen to your lovely wife! I like the photos. The couples look nice. Cute kitty too!

I really like the photo with cloud and river. The butterfly! - Mariko has them too