Today we're visiting FUCAPI, the Fundacao Centro de Analise, Pesquisa e Inovacao Tecnologica (The Foundation Center for Analysis, Research and Technological Innovation). I'm in a small auditorium right now with a screen in front, and they are starting a video about FUCAPI that I will try to summarize here.
The Amazon is the planet's largest freshwater reserve, with vast quantities of wood and minerals. Manaus is an economic powerhouse, the eighth largest city in Brazil and the center for 60% of northern Brazil's economic activity, with a total revenue of about $28 billion per year. FUCAPI places itself at the center of all this. They are involved in many areas, from cell phone technology to electronic voting machines to sewage treatment bioreactors to processing of guarana berries. In all cases the overall goal is to help the development of the Amazonas region in ways that are compatible with the rainforest.
Now 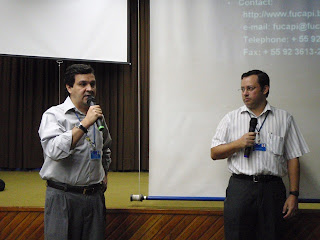 we're getting a little PowerPoint presentation from a fellow who works here. FUCAPI is now 26 years old. It is a nonprofit private foundation. Its initial focus in 1982 was industrial production analysis, but in 1986 they changed their scope to larger issues. FUCAPI's primary vision is the sustainable development of the Amazonas region through technology and education. Their goal is to become "a benchmark as an educational and technological institute to society, based upon the expertises of its professionals". They have partnerships with many international companies (Oracle, Diebold), government agencies, and small local institutions. They employ about 1500 people now. You can see more about them at http://www.fucapi.br.
A question was asked about their source of funding; it is from organizations (corporations, government agencies) that essentially hire them for their expertise. They receive no bulk funding from the government to support them in general, although individual government agencies do pay them for specific projects.
A question was asked about their involvement in carbon dioxide reductions. Their answer was very long, and made clear that they take the problem seriously and are attacking it on many fronts, from promoting a carbon credit scheme to promoting biodiesel to many other things. They promote reforestation in the south of Brazil, and fight deforestation in the Amazon, and work closely with local people to try to promote sustainable ways of life with a low carbon footprint. They are, however, opposed to the view of the Amazon as a sanctuary; 23 million people live in it and depend upon it for their livelihood, and that is a fact that should not change.
A question was asked about water purification and distribution systems that FUCAPI had been mentioned as producing and promoting; the questioner had visited several small river communities in the past week and had not seen any evidence of such systems in use. The seasonal rise and fall of the Amazon is about 29 meters, and the width of the river can vary by a factor of twenty. People living on the margins of the rivers cannot have normal systems for water or waste, because of these variations; so FUCAPI has been developing water treatment systems to address the needs of these communities. It purifies water from wastewater on-site, can be submerged without any problems, and works using aerobic and anaerobic bacteria and ultraviolet light. The reactors are made from recycled PET plastic from plastic water bottles; about 1500 water bottles are used to make one reactor. The reactors use no electricity. The resulting water is very nearly pure. These systems have been installed in companies, hotels, hospitals, universities, small floating river restaurants, and floating hotels; they have models for small houses as well, at a cost of about $4000 for a five-house treatment unit. The use of these reactors will soon be required by law, if I understood correctly. Right now only a small percentage of the wastewater from Manaus is treated; most is released into the rivers, and in some areas the pollution is extreme. A shift to these bioreactors provides a huge opportunity; the hope is that in five years the rivers will be clean again. Applications for this technology may reach far beyond Brazil in the future.
A question was asked about FUCAPI's involvement in hydroelectric power (which provides most of the electrical power in the Amazonas region), and what measures are taken to minimize the ecological impact of hydroelectric generation. Because the Amazonas region is so flat, the area flooded by dams is much larger than it would be in other regions. Problems with hydroelectric power involve submerging of forest, disruption of indigenous communities, and effects upon river fish. Projects at FUCAPI include increasing efficiency of hydroelectric generation, finding ways to decrease the flooded area, new fish ladder technologies, and turbine innovations to allow generation from a lesser height differential. The impact upon indigenous people is addressed chiefly by not siting dams in their areas; no planned hydroelectric plants will impact indigenous people. By 2025 Brazil will be the world's fifth largest economy, so Brazil will need a huge amount of energy. They are focusing on hydroelectric energy and renewable energies, particularly biodiesel from ethanol; they don't want to use nuclear power. Brazil also has large oil reserves, but they are trying to focus on biofuels, not fossil fuels.
A question was asked about FUCAPI's involvement in education. They are involved from high school to postgraduate and MBA work. They help about 4000 students currently, and offer classes in many different areas, with a focus on technology. Night classes are offered for those who work during the day. FUCAPI partners with international and American universities, including San Jose State University. One current goal is to bring 18 US students to Brazil and 18 Brazilian students to the US in the next four years, on an exchange program. The exchange program currently centers on students in management and technology.
Next 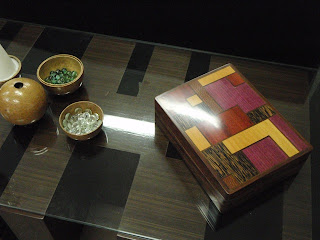 we wandered over to a building at FUCAPI called the Tropical Design Center. They design furniture and other items out of tropical woods, and then promulgate those designs to people (indigenous and otherwise) in rural areas of Brazil for manufacture. The goal is to use fallen trees, wood scrap, and other sustainable materials to produce high-quality (and high-priced!) items for export. They had some stuff on display, and it was really quite beautiful. Their website is http://www.nativeoriginal.com.br/, although it seems to only be in Portuguese, to offer other products not made by FUCAPI, and not to have prices (in any currency) on the site. Possibly if my Portuguese were better I could find that information somewhere.
Now 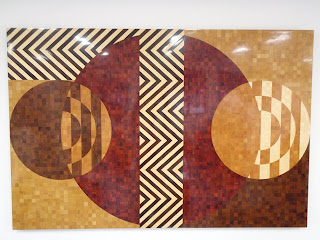 we're in a highly air-conditioned computer classroom at FUCAPI where we're all busily checking email and surfing. I'm going to give my presentation in a couple of minutes, and then two others will present as well; so I'll end this blog entry here, and put up separate entries for the presentations.
Posted by Ben Haller at 9:30 AM