Just had lunch; more rice, fish, and chicken, plus a very tasty bean and sausage soup, and an interesting dessert: guava paste (sort of like jelly but so thick it can be cut into cubes) in a creamy sauce. Vida, who grew up in Puerto Rico, says she is accustomed to having guava paste with a slice of cheese, as breakfast. Apparently it's available in the U.S., so I'll have to try that when I get back.
Breakfast, while I'm on the subject of food, was scrambled eggs, slices of sausage, hot dogs cooked in an onion and tomato sauce, and, oh, something else I can't remember. There were several kinds of fruit juice; I had guayaba and aceirola (but I don't know if I'm spelling them right), and both tasted sort of like watery strawberries. The food here is always good; it's quite impressive that they can cook this way in such a remote location. Everything is very fresh; the fish we eat was caught in the lake just hours beforehand, and I expect the fruit is probably locally harvested too. This lodge provides employment for quite a few local people, I expect.
Lily, the little monkey baby adopted by the staff here, was being her charming self again at lunch. She wrapped herself around the leg of one of the staff, and didn't want to let go, so he walked around doing various chores with her hanging on to his leg. Then she decided to wander around, and I played with her for a little while, chasing her and tickling her; she liked to play by running away a step or two and then flopping over on her side, and then trying to get up and scoot away again before I could reach her. I picked her up for a while, and she let me hold her longer today; I think she is getting used to me. Now I smell like monkey, a musky sort of odor, not unpleasant but distinctly animal.
As soon as I walked out my front door this morning on the way to breakfast, I was again confronted by wildlife: a 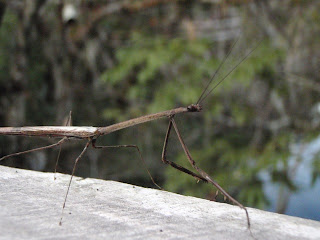 praying mantis was climbing up the wall next to my door! Its front legs were pointed straight forward to give the illusion that they were the end of the twig that its body was camouflaged to look like; at first I thought it was a remarkable stick insect whose eyes and antennae were located an inch down from the end of its body. It was quite placid and slow-moving, so I picked it up, carried it around with me for a while, and showed it to everybody before depositing it on a promising-looking tree. There were also two bats resting on the side of the cabin; they're still there now, so I guess they intend to sleep there until nightfall. Finally, there was a fairly large moth parked above my front door, a warm brown color with subtle markings. Each time I walk out the door I have to take a careful survey of all the critters there! 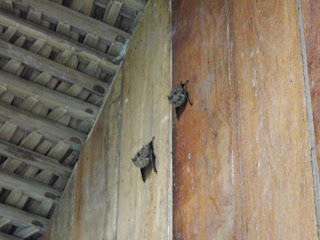 After breakfast we took a short boat ride to the house of the second-in-command of the local indigenous group. He gave us a tour of the area, starting with a taste of a fruit that our guide called a lime tangerine, and that peeled and looked like a tangerine, but that was perhaps even more tart and acidic than a lime, but quite tasty. Then he showed us a 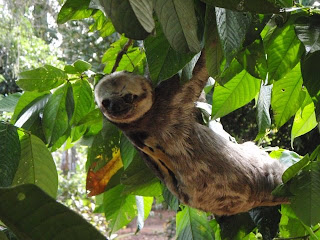 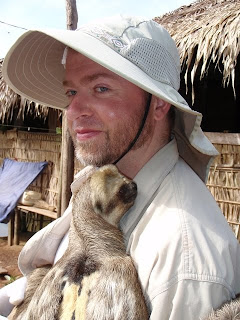 pet sloth he keeps in a tree by his house (I got to hold the sloth, in fact), which had pretty yellow and black markings on its back indicating, we were told, that it is a male. He had found the sloth when it was small, injured by a thorn in its eye, and he adopted it and helped it get better. 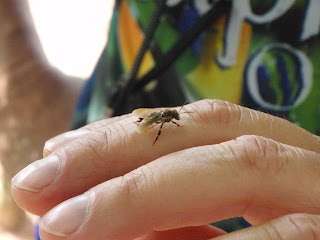 He kept bees in a hive near his house, and he knocked on the hive to bring them out; they are not a stinging species, apparently, and looked quite different from American honeybees (Apis mellifera). They do still make honey, though; he gave us a taste of it, which was delicious and distinctive. The bees apparently spend a lot of time at the lime tangerine tree, giving their honey a very fruity, tart taste. I think I will try to obtain some to bring back; I forgot to ask at the time.
Then we met a little 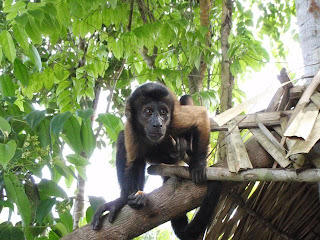 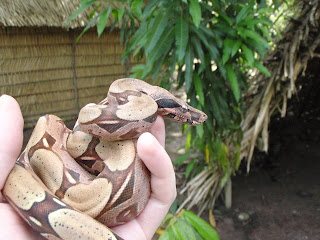 capuchin monkey he keeps as a pet, and a snake he has, and had a few brazil nuts (which come as segments, like the segments of an orange, from a softball-sized black shell that he cracked open with a machete). 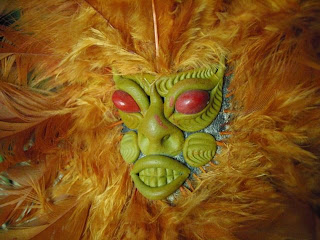 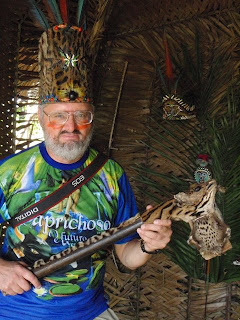 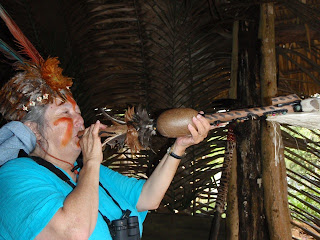 Then he gave us a little demonstration with a blowgun and a bow and arrow, and let us try both; he had a styrofoam target set up a ways away which we all had to work quite hard to even reach, much less hit, but which was trivial for him. He painted Vida's face with the red dye from the fruit we had seen the previous day at the rubber tree museum; Vida now looks quite tribal, and the dye doesn't really wash out! He sang two short songs for us in his native language, with us accompanying him on maracas, which was a better experience than it probably sounds reading this. He showed us quite a few medicinal plants and explained what they were for: this one for insect bites, this one for high cholesterol, this one for diarrhea, and so forth. Finally, he introduced us to a pair of small birds and a 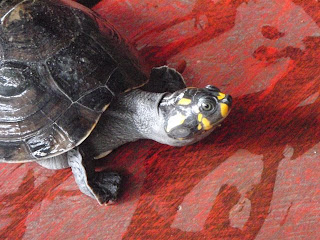 pair of turtles he kept in his house.
At the end he left us to look at a wall of earrings, bracelets, necklaces, and so forth; he said his wife had made them, which may or may not be true; they looked a great deal like the jewelry that an been for sale an INPA, but perhaps that's just the traditional style. I'm trying not to be too cynical about the whole thing; the tour didn't feel nearly as exploitive or fake as I had expected (I almost stayed back at the lodge, expecting the worst), and he seemed genuinely happy to show us around. Supposedly he receives no compensation at all for doing these tours, except the pittance he makes off selling jewelry; he volunteers to do it because he wants Westerners to see his culture. I think that might even be true, who knows. The animals in his care seemed happy and healthy; it didn't feel like he kept them just for a petting zoo for tourists, he seemed to really love all the animals. Or maybe I'm just making excuses. :->
Anyhow, in a couple of hours we're heading out on a boat tour down some small side channels and little waterways, in the hopes of seeing some wildlife up close. The guide keeps saying "toucans," so maybe I'll get that toucan photo I've been wanting!
Posted by Ben Haller at 12:50 PM