Woke up early to pack before breakfast, but the generator is off, so I have no light. So I'll write up what we did yesterday afternoon, instead. We went out in the "canoe" for more than five hours, from a little after three until almost 8:30. By the time we got back, our rear ends were protesting loudly about the wooden seats!
We started out by going to a spot good for seeing boto, the pink Amazon river dolphins. Last time had been unsuccessful, but this time was a roaring success. First we found a mother with a baby, and watched them surface a few times, but they soon vanished on us; probably the mother didn't like people being so close. Then we found a spot where two different groups of boto were swimming, and we saw them surface repeatedly. They were in a playful mood; they blew bubbles under our boat several times, and they surfaced in formation and in rapid succession, letting us see them well. This is somewhat unusual behavior for the usually secretive boto, although by no means unheard of. We all got a good look at their color, which is unusual and hard to describe. Vida called it a "dusty rose," but I think they are redder and darker than that. Perhaps similar to the color of the inside of a guava. They were quite beautiful.
Then we tooled around looking for wildlife, and mostly found only birds. We saw a paradise jacamar again, much more clearly than the first time; they are quite beautiful, with a very long tail and a white collar on green, blue and brown plumage. Both yellow-billed terns and large-billed terns were flying in large numbers, occasionally plunging into the water at high speed to catch things. Egrets were flying in formation in large numbers, but it was difficult to identify which species; from that behavior alone, most likely they were cattle egrets again, but it looked like they had black legs. Who knows. We saw several snail kites near nightfall, both flying and perched, and a yellow-headed caracara, a type of falcon, in a high tree at the water's edge. I managed to pin down the dove/pigeon we've been seeing as a ruddy pigeon, having finally gotten a really good look at one. We saw our first greater ani fly and land, which was quite exciting -- they are very large, almost half a meter long, with dark iridescent green and blue plumage. A couple of black birds seen in silhouette were confidently identified as black-fronted nunbirds by our guide, who was incredibly good; he quickly identified everything we saw without the use of binoculars, often by call as well as appearance, and he was never wrong in all the instances where I was able to check him. Still, perhaps I won't count the nunbirds, since I wouldn't have been able to identify them from what I saw of them. We saw a pair of toucans fly across the river again, but again, they vanished before we could even get binoculars on them. They're incredibly hard to get a good look at. Finally, several tropical kingbirds were in trees near the water.

After the sun set over the water, which was beautiful to watch as always, we went looking for caimans. Our guide stood at the front of the boat and rapidly passed his flashlight along the shoreline, watching for the reflection of the light from a caiman's eyes. He found several that wisely scooted away when our boat approached, so we would plunge into the reeds near the shore and have to laboriously back out into the open water again. The reeds in some places had little glow-worms phosphorescing near the water's surface, which was interesting to see. At one point I saw the flashlight's reflection from a caiman's eyes, at another, a flash of motion as a cayman dove into the water to evade capture. Finally our guide was successful in catching a small caiman, a baby perhaps a half a meter long, by lying down in the front of the boat and scooping up the caiman as the boat plunged into the reeds next to it. It didn't struggle at all, interestingly, but just hung limply in his hand, seemingly patiently awaiting its release ("oh, god, this guy again"). 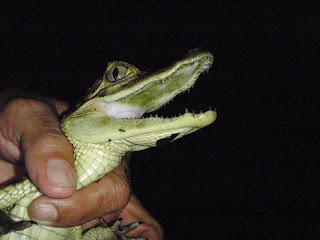 The skin on its belly was very soft and pliable, while its back was very hard and armored. After a couple of minutes he released it back into the water. It hung motionless for just a moment, then disappeared with a flick of its tail.
The boat ride back was an adventure in itself. It was quite dark, with only a crescent moon faintly illuminating the landscape, and we traveled for more than an hour to get back to the lodge. As far as any of us could tell, it all looked the same in every direction: moonlit water followed by dark trees. But our guide unhesitatingly directed the boat, silently flicking his flashlight this way and that to tell the fellow at the back of the boat which way to steer. Sometimes we were out on open water, sometimes passing through narrow channels, sometimes brushing under overhanging trees. I asked our guide how he knew where to go, and he just replied that he has never been lost in his life. He said that in the high water season, all the rivers south of the Solimoes and the Amazon are connected; if we went off course, he said, we would end up one another river. Only when the water is low do they differentiate into truly distinct rivers. People take advantage of these shortcuts; in high water season you can catch a water taxi from Manaus to the Juma lake area that takes about twelve hours via shortcuts, but in low water season the same water taxi takes two days. By the time we got back we were all quite ready for dinner. Dessert was the lime mousse again, very yummy.
Difficult bird-watching this morning; lots of small, flitty, drab birds that I'm not good enough to identify before they disappear. The only one I think I got a handle on at all was a euphonia, but I don't know what species. A flock of what looked like geese flew overhead, but my guidebook lists no geese at all, so that's a mystery. I glimpsed the woodcreeper for a moment when I cam out my door, but it didn't want to be seen, and flew off instantly. I think I hear dolphins blowing in the water right in front of my cabin; I heard howler monkeys earlier. This really is an amazing place.
Posted by Ben Haller at 5:25 AM